Photographing a Ferrari 40 in Sydney

It is truly rare to be photographing a Ferrari 40 in Sydney, but we did, enjoy our photo gallery.

The F40 supercar is a a mid-engine, rear-wheel drive, two-door coupé built from 1987 to 1992, with the LM and GTE race car versions continuing production until 1994 and 1996 respectively.

The successor to the Ferrari 288 GTO, it was designed to celebrate Ferrari’s 40th anniversary and was the last Ferrari automobile personally approved by Enzo Ferrari. At the time it was Ferrari’s fastest, most powerful, and most expensive car for sale.

These car photos were taken on two separate occasions at Sydney Motorsport Park while their owners attended a local track day for prestige sports cars at the monthly Burrows Drive Days. It’s an exclusive event held for a private group each month.

See the recent marketing and photography work by La Lente. 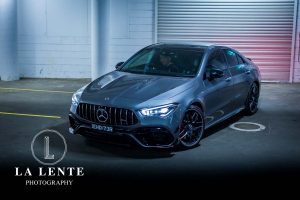 A sample of our F40 car photography

“La Lente captured wonderful moments from my son’s 21st birthday party. He has a great eye for special moments as well as quirky ones. So pleased not to have the pressure of taking photos myself! Would definitely use them again”